We are driving through Kachchh, speeding away towards the east.
Today we are going to Bela, a village en route to Dholavira, the historic site of the Indus Valley Civilization. We are in the district of Rapar and I can already see the Rann.

“Shruthi, do you know about the people that live here?”
“Hmm?”
“They do not think twice about picking a fight, and even less before picking up a weapon!”
“Yes, yes, he is right. They are a very fighter type, you should be careful!”
I am warned about rubbing against people on the streets when we get off the car.
I don’t know what to say.
“Arey, it is a joke yaar. Relax!”
Ah.

The other two in the car are nearly snoring.
We started at 6am, it is nearly 9 now.

Bela is a village about 30kms away from Rapar. It is believed to have been very close to the sea once upon a time. The land eventually rose above sea level. Bela used to be a flourishing village for blockprint. That is also why we are here today.

We enter the front room of a house, with a high ceiling. The fan is running at full speed with an unusual hum. The only other noise is the rhythmic thumping of wooden blocks against the thick cotton canvas cloth. There are two low wooden tables on either side of the room. Behind one of them sits Mansukh, with his old tiny blocks and the ubiquitous yellow canvas.
Mansukh is a Hindu Khatri.He is also the last blockprinter left in Bela.

Bela is an old town, maybe 300 years old, once ruled by Rao of Kachchh. The town today has about 200 families living there. They mostly do farming. Some of them have kept shops. The market space is closed during most of the time that we are in the village.

“They are sleeping. Shop will open when sleep leaves town”, says Mansukh.

Mansukh works alone. He prints and dyes by himself. He still uses the same blocks from his grandfather’s times. No new blocks have been made since two generations. The blocks are really tiny compared to the ones I have seen in Ajrakhpur or Dhamadka. 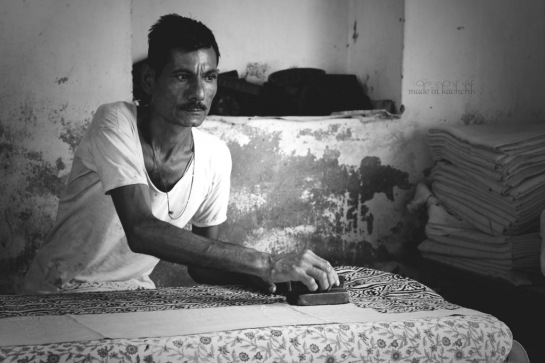 Since they are half the size as compared to the new ones used by blockprinters today, Mansukh takes twice the time to print a unit metre of cloth.

Once he finishes an order, he travels to Bhuj with it. At the store he is made to check and count every metre of cloth in front of the businessmen who makes sure his calculations are correct. He receives Rs15 per bag!

The front room leads into the courtyard of their house. It is here that the dyeing is done. I notice that the vessel used for dyeing is of old style with a narrow bottom, one that I had seen the previous day in an antique collectors shop. When was the last time he used it?

Drinking water is an issue in the town. A tanker fills the private tanks of people once every two days. For dyeing purposes, they had a canal earlier whose water was very kaadak(hard/salty), that dried up. So now he has to collect water from a bore well, a little further away.

“In Ajrakhpur, we are so lucky!” says Rauf. “We use sooo much water, sweet water!”

Beyond the courtyard lies the family home. The house was completely reconstructed after the earthquake, using the old wood and stone. It is charming even today. He has 3 children. The oldest one is working in Bhuj while the younger daughter and son stay with their parents in Bela.
None of his children want to follow their father’s footsteps.

Mansukh learnt the craft from his brother. His father died 40 years ago.
“How old are you now Mansukhbhai?” I ask him.
“I must be 50.”

His brother now keeps a sweet shop.
After the India Pakistan separation, the people started leaving the village of Bela for newer prospects in larger towns. They moved to Ahmedabad and even Mumbai. The town hence lost its visitors and slowly the only remaining people settled down to having petty groceries, milk and sweet shops besides agriculture. There used to be atleast 60 blockprinters in Bela. They have all closed.

“Why did you not leave?” I ask.
“I do not know anything else. This is what I do.”
“Yes, he had stopped in-between for a while, but he got back”, says his daughter.
She seems like a very clever child. His son is shy and has lost complete hope in his father’s work. He does not believe it is a ‘valuable’ thing to do. He is the youngest kid, probably 12 years old. Cannot blame him. We discuss about how a ‘blockprinting man’ will not find a wife now in Bela. It may be best for his son not to take over.

Mansukh shows us all the traditional blocks and some scrap pieces of old blockprinted fabric that he has. We speak about designs and take photographs. He even shows us a jacket that he had designed, but that was a while ago. 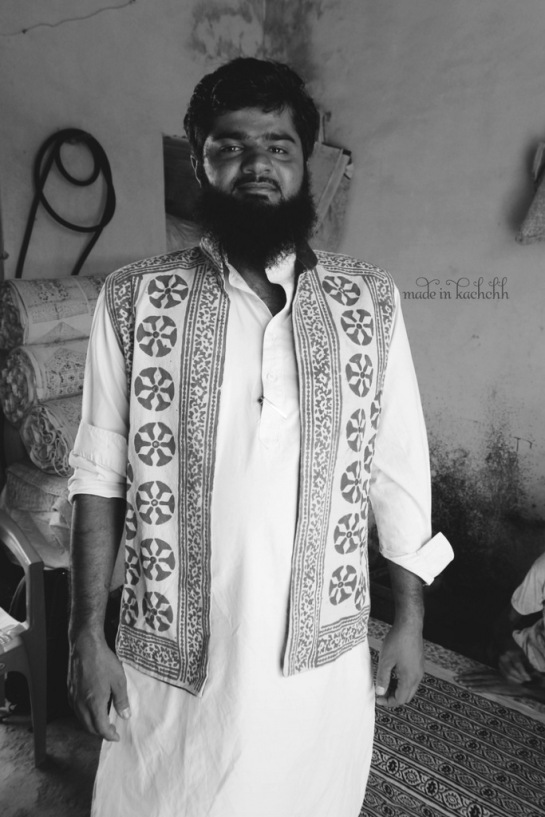 They offer us lunch. Delicious potato sag with tiny tiny pooris (just like his blocks), and sevaiyya (sweet) and chaas (buttermilk). 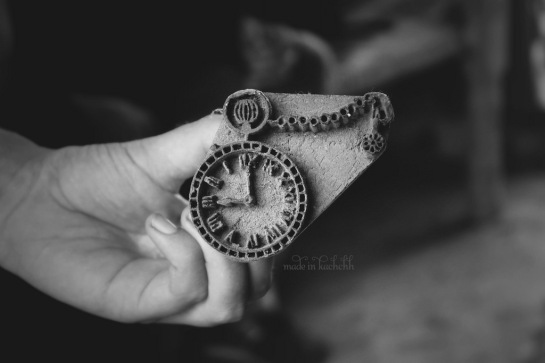 Mansukh is a man of few words. I cannot say if his silence is from wisdom or from lack of exposure. He is very isolated from the rest of the blockprint community of kachchh. He has a kind of naive curiosity about Ajrakhpur after lunch, “What do you make there?” he asks Rauf. Is it a question coming from a man stuck in the past?
“Come to Ajrakhpur and see. Sarees, dresses, stoles, bedspreads, you name it and we make it there!” says Rauf. Mansukh smiles, do I see a hint of hope? 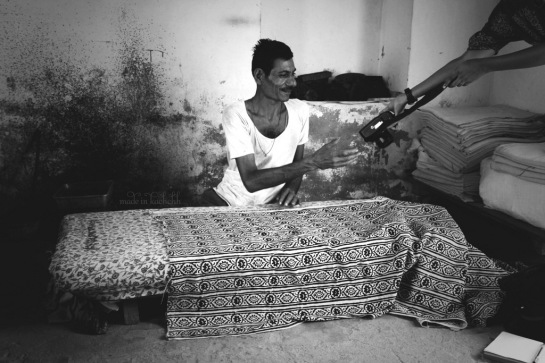 We speak a lot to Mansukh’s son, Rauf tells him about how successful his business is in Ajrakhpur.
No reaction.
How blockprinting is done in several different ways and products.
No reaction.
How he gets to travel a lot.
No reaction.
How many foreigners visit his house everyday.
“Oh really!?”, comes the response. We show him pictures of Rauf’s workshop on madeinkachchh blog.
We hope they will visit Ajrakhpur.

When we are about to leave and start our byes, Mansukh says, “We had many more blocks. Traditional ones. But my brother and I had no use for them. We packed them up in a sack and dropped them into the river.”

Old photographs are my favorite.
While researching for an exhibition, I recently stumbled upon a whole lot of photographs taken by the photographer Shivashankar Narayan, c. 1870, from the Archaeological Survey of India. He submitted these images to the book “People of India” published by the ASI in eight volumes from 1868 to1875.
They are available today at the British Library.
What a wealth of history!

I am sharing a few of them here, each one beautifully traces back the history of handwork and craft practices from western India.
They are worth our attention.
We have as much to learn from them today as we did before.

01 Worker preparing thread for sari weaving
This image showing a worker crouching beside a spinning wheel [charkha] and paying off thread to a reel at the right, is probably one of the series of views of cotton manufacture shown by Narayan at the Vienna Exhibition of 1873.

02 Sari weaving, Western India
This image shows the process of the manufacture of cotton fabrics shown at the Vienna Exhibition of 1873. The weaver sits on the verandah of a house with his legs in a type of hole which contains the lower portion of the machinery which he works with a pedal at his feet. The combs are supported by ropes attached to beams in the roof. In his right hand the weaver holds the shuttle, which contains the thread which passes through the spaces created by the combs, forming the pattern. The principal comb is held in the left hand. 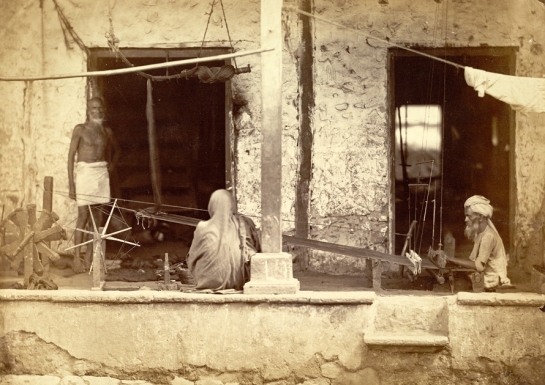 This type of handloom weaving is still practised here in Kachchh, view an article from the village of Bhujodi here.

03 Gold embroiderers
This image of embroiderers seated at sewing frames was probably an exhibition photograph. These craftsmen are working with thread which has been mixed with gold wire made from gold leaf and then melted onto silver bars and forced through small holes in a steel plate to form very fine gauge wires. The thread is used to embroider a wide range of garments; shawls, scarves, sari and turban borders, shoes, purses, tablecloths and many other items. It was held that metal threads from India were less likely to tarnish than similar products from other sources.

04 Gold and silver tape beater at work
The worker here is beating gold and silver wires (tinsel) into flattened tape on a low anvil with a small hammer. The work is carried out extremely quickly and without missing any sections of the wire drawn off the holding reel. The tapes are used as decoration on a wide range of garments and may be sewn onto or threaded through woven fabrics. It was held that metal threads from India were less likely to tarnish than similar products from other sources.

05 Silk design knotters
These silk workers are tying pieces of silk fabric into multiple pleats and knots before dyeing to produce intricate patterns. This process, which is known as ‘tie and dye’, may be repeated numerous times to produce multicoloured lines, spots and rings on the fabric. In India this traditional technique is known as Bandhani, from the Sanskrit word bandhana, which means ‘tying’, and is the origin of the word bandannah. 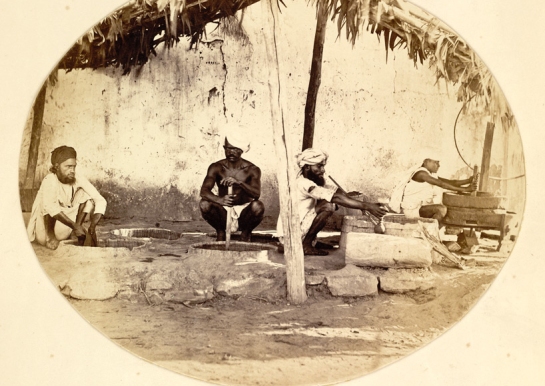 07 Bhattia turban folders at work
This image is of a group of workers folding turbans on wooden model heads. 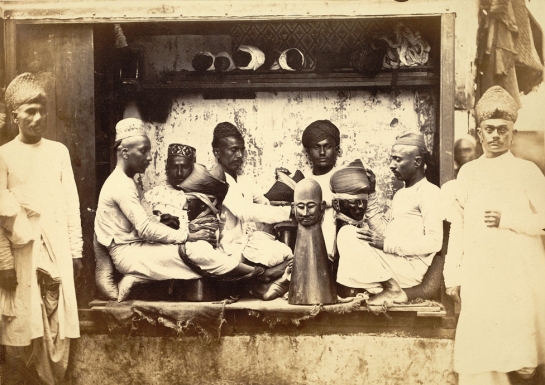 08  Bombay potters at work
This image, of two potters at work at their wheels, surrounded by their finished work was probably an exhibition print. The kumhar (potter) makes unglazed terracotta or earthenware pots for the storage of grain, spices or pickles, and for transporting and storing water. The potter also makes bricks and tiles for housing. Vessels for eating and drinking are usually made of metal or glass. However, small disposable drinking vessels, that are used once and then thrown away, are made of terracotta.